Socrates, one of my favourite classical Greek philosophers, once said that “wisdom begins in wonder”. I vaguely understood what he meant when I started travelling a few years ago – ultimately though, it was a form of poetic justice that I was to end up truly comprehending the meaning of this statement, in Socrates’ beloved home of Greece.

When most people think of visiting this historic land, images of exquisite islands adorned with bougainvillea blooms are what usually spring to mind; along with the azure vista of the Mediterranean Sea, blue topped church domes and white washed homes on cliffsides.

However, there is much more to discover about Greece than just the touristy hot-spots of Crete, Mykonos and Santorini… like, oh you know, that place where philosophy, free speech and theatre first started? One of the most ancient cities in our world with a history going back as far as over 3,400 years – a city called Athens.

Widely known as the place where democracy was born, here was the home to some of the most revered philosophers who have inspired countless generations – Aristotle, Socrates & Plato; as well as being the location where the first Olympics were held… It goes without saying that for lovers of culture & history, creatives and deep-thinkers – Athens is a place which will draw you in and fill your heart & mind with plenty to wonder about and marvel at when you visit.

So, what exactly is Acropolis? Acropolis originates from the Ancient Greek words of: Akron = highest point and Polis = city. Whilst there is more than one Acropolis in Greece, the most famous and highly adored is located in Attica, Athens. It’s situated at the top of a hill overlooking the entire capital city, where the ancient remains of the Parthenon, Erechtheion and the Temple of Athena Nike can be found.

At the base of the first entrance to Acropolis, there is a bus and taxi area – from there you will need to walk up towards the main entrance; this is quite a steep hike up so I’d recommend to wear comfortable shoes and bring plenty of water with you too. I visited here on the 5th September 2018, right at the beginning of Autumn and it was hot in the early morning when I arrived; staying hydrated is a must if you are travelling here any time outside of winter.

It’s not until you have made it up the hill, through the main entrance to purchase your tickets and then ventured out upon the rocky outcrop, that you truly come to understand how amazing & significant this place is, not only to Greece but to human civilisation as well.

I’m what could be called “vertically challenged”, so am accustomed to most people/things/places being taller or bigger than me – but honestly even a giraffe would be awe struck by the sheer grandiosity of these structures, and giraffes are the tallest animal in the world so that is really saying something – the monuments of Acropolis are huge!

Propylaea – the gateway into Acropolis

When you first venture into this UNESCO listed world heritage site, you will be faced with the looming immensity of the “Propylaea”, which in Ancient Greek means “gateway” or “gate building”.

It was here that slaves, undesirables and anyone not considered to be “ritually clean” were denied entry into the site; this is because in ancient Greece, the Acropolis was considered a sanctuary and sacred site where one was under the protection of the gods – so security was taken very seriously.

The steps of the Propylaea are steep however once you are at the top of this gateway, you will be able to see the whole city of Athens laid out before you.

After walking through the Propylaea, you won’t be able to miss the imposing Parthenon on the right-hand side. This is the iconic structure visible from many parts of Athens looking up at the hill to Acropolis. The Parthenon is a temple built to honour Athens’ patron goddess – Athena.

Constructed in 438 BC, this iconic monument has endured centuries of war, bombings and take-overs – having been utilised as the site for the Athenian Treasury, as a Christian church in the 6th century as well as a Turkish mosque in the 1460’s after the Ottoman empire won a battle here.

Walking around the Parthenon was an amazing experience for me because it highlighted the architectural talent and construction abilities of humans in ancient times. I can recall pondering how on earth could anyone have transported the construction materials up this steep hill and built this amazing temple, without the convenience of modern machinery & transport? Acropolis was the first Ancient site I have ever visited in my life and I was in awe that after thousands of centuries it still exists.

My personal favourite sight here is the Erechtheion – another temple built between 421-406 BC. What I adore the most about Erechtheion is the “porch of six Caryatids”. The Caryatids (also known as “korai” in ancient Greek) are maidens sculptured in marble, who reside on the South porch.
The Northern porch of the Erechtheion is dedicated in honour of the Greek God, Zeus, Athena’s father.

It’s worthwhile to point out that the Caryatids propping up the balcony of Erechtheion are replicas, so if you are interested in viewing the originals, you can locate five of these inside the Acropolis Museum of Athens with the remaining sixth maiden residing in the British museum in London.

Greek flag atop the belvedere

After spending a fair bit of time admiring the Parthenon & Erechtheion, taking a lot of photos and breathing in the magic of this site, I headed straight towards the rear of Acropolis to view the medieval belvedere upon which the Greek flag proudly adorns the high point of its capital. It is from here that you will have some amazing views of the Acropolis with Athens in the background.

Before leaving Acropolis, on the right of the Propylaea you can see the smaller but no less significant Temple of Athena Nike. In Greek Nike translates to “Victory” – it was this temple which was constructed around 420 BC that was dedicated to Athena in the hopes their patron goddess would grace the Athenians in being victorious; namely in the Peloponnesian war which involved the Greek battles of the Athenians against the Spartans.

Once you have explored the Propylaea, Parthenon and Temples, on the right side facing towards the Greek flag, you will also discover some amazing views of Athens, with the sea in the background and directly in front of you down the steep cliff, the Theatre of Dionysus can be seen.

Tickets to Acropolis can be purchased at the ticket office on site – alternatively you can also pre-purchase tickets through travel agents or tour companies. If you are going to purchase the tickets at the Acropolis ticket office like I did, then I’d recommend you arrive as early as you can before the crowds arrive.

I spent about two hours exploring the site in the morning and by the time I left there were more tourists lining up to enter. Acropolis is open from 8am to 5pm with the last entry being allowed at 4.30pm. Tickets to the site during the winter season cost 10 euros and during the summer season will cost 20 euros. Free entry to the site is also offered on the following days:

Take a step back in time

Greece is the home of the gods; they may have died but their presence still makes itself felt. The gods were of human proportion: they were created out of the human spirit.

When Henry Miller so eloquently summed up Greece with that statement, I believe that he must have been inspired after visiting Acropolis. For anyone who has studied Ancient History, making a trek up the steep Athenian hills to see one of the true wonders of our world is an experience akin to being transported back in time to the era of Athena, Hermes & Zeus.

Whether you’re searching for a place to marvel at the human spirit of creativity & ingenuity, seeking a stop-over to rest for a day or two, or you’re on your way to visit the idyllic surrounding Greek islands; I’d encourage you to consider spending some time in here in Athens and visit Acropolis.

You will depart with the awareness that Greece is not just about picture perfect island images – it’s also an ancient land with real people; a society that has retained its fighting spirit & who manage to rise from the ashes time and time again – just like the gods & goddesses… 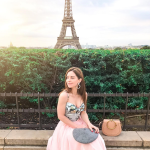 Hi, I'm Lauren - a fashion, beauty & lifestyle blogger based in Sydney, Australia. I love being creative, small animals, chocolate, travel and sharing inspiration with others!